Blog Don’t Open Doors for Burglars: Doorstep Crime, What you need to know!

Don’t Open Doors for Burglars: Doorstep Crime, What you need to know!

Whether it is rogue traders, cold callers, bogus officials or phony authority figures; the instigators of doorstep crime can come in all disguises and masquerades.

Why would a criminal bother trying to break into a home when they can just knock and be invited in?

Door step crime is a scam whereby criminals pretend to be someone they are not in order to gain the trust of a homeowner or occupant of a home fundamentally so they can gain access to burgle them.

Those committing these crimes are essentially professional con artists and anyone can become a victim. It has been proven that the elderly are generally mostly targeted by this kind of crime – but everyone must be vigilant.

Doorstep crime has become a predominant way of home intrusion. It’s no longer the case that thieves are masked with balaclavas and come armed with baseball bats –they come in all shapes and sizes. If a tenant or homeowner cannot see who is on the other side of their door, they cannot protect themselves from becoming a burglary victim.

Who to look out for:

– Bogus officials – anyone coming to your home who claims to need to check your gas/electricity/water etc. would have contacted you previously to make an appointment and should not turn up unexpectedly.

– Authority Figures – if the police show up at your door and you are unsure whether they are legitimate, call your local station to verify before letting them in.

– Charities and Sales people – By installing a door chain it is possible communicate with those who call without letting them in, and you should never feel pressured to let stranger into your home. You might also consider placing a no cold caller sign in your window.

Don’t overlook the importance of a door viewer! 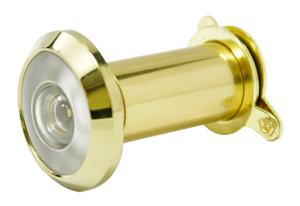 Security measures are getting smarter, but so are burglars. Just because it has become harder to gain unlawful entry to a property with CCTV, burglar alarms and reinforced locks – doesn’t mean an intruder cannot get it!

By installing door viewers on homes, it gives the occupant control over who they open their door to. If they have any doubts about the identity of who might be on the other side they have the choice not to open the door, but without any indication of who it might be, you risk someone barging in when the door is opened.

It’s been heard of people going upstairs to look out of a window and see who was calling or speaking to them through the letterbox, even putting something behind the door in case someone tries to charge through. This isn’t safe nor is it convenient.

Door viewers are inexpensive additional security features that help tackle doorstep crime – which is undoubtedly a problem, especially for the more vulnerable.

We have a range of door viewers and  door chains which will do just the job in making property safer and protecting occupants: